Tactile Massage, is a massage method that consists of a soft, compliant touch.

Jikiden Reiki is a Japanese method of supplying the energy (ki) the body needs to help itself.

In this treatment, these two methods are combined.

What is a tactile massage?

In this form of tactile massage, the touch takes place with an even

and light pressure and follows an intuitive and slow movement

pattern. The touch and the movement of the hands provide security

By touching the skin in this conscious way, the oxytocin system

in the body is activated. Oxytocin is a hormone that has a

calming and soothing effect and makes us feel comfortable.

One could say that oxytocin is the opposite of adrenaline.

While the adrenaline is stressful, creates alertness and speeds us up,

the oxytocin calms us down and gives us peace.

What is Jikiden Reiki?

its method at the beginning of the last century.

The emphasis is on treating the areas of the client

body that shows an excessive degree of stressful energy and/or

blockages. The critical areas are treated with the help of the hands, whereby the stagnated energy is set in motion and the blockages are dissolved to return to balance. So-called Reiki ("Life force", "Prana") is added, which gives the organism locally and generally an energy supplement aimed at the critical area.

The method supports and strengthens the client's natural healing system and immune system - the cleansing system.

such as stress, anxiety, insomnia, trauma.

This is what the combined Tactile ReikiMassage treatment looks like:

During the treatment, you lie on a workbench with warm blankets over you.

Only the part of the body being treated, such as the back, is not covered.

oil is used to facilitate the flow of the hands.

The therapist works smoothly in definite and intuitive movement patterns.

For those who are sensitive to touch (eg fibromyalgia), the touch can be done on the outside of the clothes.

I work intuitively and follow the body / energy system's signals that tell which parts of the body need to be touched and treated, but is also listen to your wishes about where and how you want to be touched.

Otherwise, every such treatment and in any case is a support in the personal healing process, whether it is on a physical or mental level.

He is also trained in Massage by Lis Pressel according to Dr. Simeon Pressel's method and has developed a toning massage (tones and touch) that was practiced in special schools.

He has also studied Pranic Healing according to Master Co.

The treatment takes about 50 min

Questions and Booking an appointment: 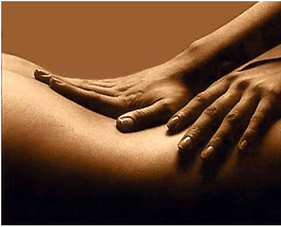