"Kefas is constantly traveling in the world of voice, singing, body

and movement - exploring the sources, expressions and its

healing properties. He believes that singing is an innate, but often

repressed, right and that free" open "singing is healing in nature

and harmonizing, generates peace, unity and understanding and is

a constant source of energy and joy... "

working pedagogically, artistically and therapeutically with

and is also an appreciated choir and workshop leader at international conferences.

Except workshops he leads several local community choirs and gives private sessions at his reception in Mölnbo that range from Singing lessons  and Voice Coaching to Therapeutic Voice Work . I also give Sound Healing Sessions - in groups and privately.

many more, but perhaps above all, through the work itself and all the dedicated students and workshop  participants.

Since 1982, he has participated in many hundreds of stage productions - as a dancer, actor, musician, singer, actor, composer or director.

He has written more than 300 musical opuses, including music for several dance and theater performances on .

Since 1998 also working as an actor, singer and teacher at Theatre Slava in Stockholm. 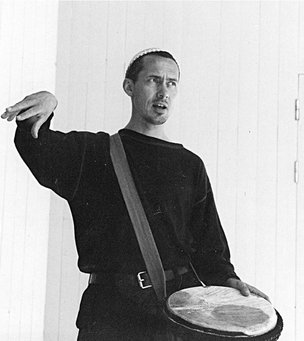